Captain Reverend Allan McDougall McColl was born in Govan, Glasgow, Lanarkshire, Scotland on 28 December 1873. His parents, John McColl and Isabella McDougall, were both from Argyllshire, Scotland and Allan was one of at least nine children. His father was a ship carpenter/shipwright. At the time of the 1901 census Allan was living in Govan, Lanarkshire and working for a missionary church. According to his obituary, he attended the University of Glasgow and graduated in 1908. About a year later he immigrated to Canada and took his theological training at the Presbyterian Westminster Hall in Vancouver, graduating in 1910.

Allan was married in Vancouver on 31 August 1911. He was a clergyman by then and his residence was Tofield, Alberta. His wife, Grace Gertrude Campbell, was born in Essex County, Ontario in 1887, the daughter of William Campbell and Mary O’Donnell. Allan and Grace probably settled in Tofield at first and their daughter Lillian Mildred was born in Alberta in 1912. By the spring of 1913 they were living in Kenora, Ontario where Allan served at Knox Presbyterian Church. They stayed in Kenora for about two years before moving to Melfort, Saskatchewan.

In the early summer of 1917 the war was about to enter its third year. Allan enlisted in Regina on 20 June, signing up as a Private with the Divisional Cycle Platoon. His residence was Melfort, next of kin was his wife, and he said his father was living in Glasgow and his mother was deceased. Allan sailed from Halifax with his unit on 26 November on the SS Scotian, arriving in Liverpool about twelve days later. He was assigned to the Canadian Reserve Cycle Company at Seaford. While he was overseas his wife moved back to Vancouver.

In January 1918 Allan sprained his ankle while on leave and he spent a month at No. 10 General Canadian Hospital followed by two months at the convalescent centre in Epsom. On 24 May he was appointed Acting Corporal. In August he was transferred to the Canadian Chaplain Service and given a commission as Honourary Captain. He served in the Bramshott area for four months before being sent to France at the end of December. Over the next seven months he was attached to No. 3 Casualty Clearing Station, No. 1 Canadian Infantry Works Company, the Canadian Base Depot and the War Graves Detachment. He returned to England in July 1919 and sailed for Canada two months later on the SS Minnekahda, arriving in Halifax on 14 September. He was discharged on demobilization on 24 September.

Allan and Grace had a son, Allan Campbell, who was born in Vancouver in July 1920. When the next census was taken in the summer of 1921 they were living in Calgary, Alberta. Around 1927 Allan moved to the U.S. and over the next twenty years he served at several churches in Nebraska and Kansas. His daughter Lillian was married in Glenwood, Iowa in 1933 to Forrest Benjamin Spieler, a physician, and they raised three children. During the Second World War Allan’s son served with the 82nd Airborne Division, U.S. Army. He was a First Lieutenant and paratrooper and he served in Europe. In civilian life he became a mechanical engineer. He married Ernestine Tarpley and they had five children.

Allan retired around 1947 and he and his wife moved back to Vancouver, where he continued to be involved in ministry work. He was also a member of a Great War veterans’ group, chaplain for a masonic lodge and involved with the Boy Scouts and Girl Scouts/Girl Guides. Grace died in Vancouver on 24 March 1949, at age 61. Allan passed away in Shaughnessy Veterans Hospital on 15 November 1949, at age 75. His military funeral was held two days later and he’s buried, along with Grace, in Mountain View Cemetery. His daughter Lillian died in Minnesota in 1977 and she’s interred with her husband in Norwood Cemetery, Crow Wing County, Minnesota. Allan Jr. died in 2002 and he’s buried along with his wife in Chattanooga National Cemetery in Chattanooga, Tennessee.

Captain Reverend Allan McDougall McColl is remembered on the First World War Roll of Honour of Presbyterian clergymen at the Presbyterian College of Montreal. 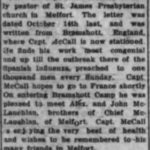