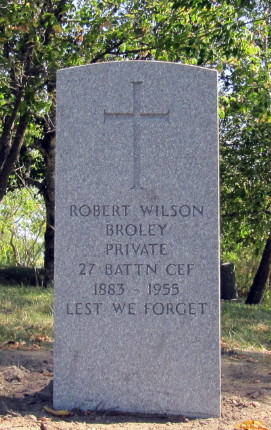 Samuel was listed as a mill labourer on the 1901 Rat Portage census, with children William, Robert, and Russell still living at home. With occupation given as clerk, Robert signed his recruitment papers in Port Arthur on 3 April 1918. He gave his mother Rebecca in Kenora as next of kin and had completed his medical examination in Kenora the previous October.

With the 5th Draft of the 1st Depot Battalion, Manitoba Regiment, Private Robert Wilson Broley embarked from Halifax aboard the SS Melita on 17 April 1918. Upon arrival in England he was taken on strength with the 11th Canadian Reserve Battalion at Seaford. In October he proceeded overseas to join the 27th Battalion in the field.

With the end of the war, Private Robert Broley returned to England in late February of 1919 and embarked for Canada on the 14th of May, on his way home to Kenora. The 1921 Canada census found Robert and his mother living on 7th Avenue South. Over the years Robert clerked in White and Mannahan, Beatty’s Clothing Store, Al Young’s Clothing Store, and in later years he operated a tourist camp on Dogtooth Lake. He retired in 1951.

Predeceased by his father Samuel in 1902, his mother Rebecca in 1926, both in Kenora, as well as his sister Mary Ann Mayes in Toronto in 1928, brother Norman in 1933 in British Columbia, sister Maud Thorpe in 1947 in Kenora, brother Russell in 1954 in Kenora, and sister Ida Armstrong, Robert died suddenly on 1 November 1955 in the Kenora General Hospital. Along with his parents, he is interred in the Lake of the Woods Cemetery, Kenora. At the time of his death he was survived by his brother James of Victoria, brother William of North Battleford, and nieces and nephews. Robert’s Veteran Death Card listed his nephew, Mr. C. Thorpe, of Winnipeg as his next of kin.

Robert’s nephew Hubert Broley, son of his brother James, trained as a cadet pilot in Canada with the Royal Air Force. Robert’s grave marker was installed in the Lake of the Woods Cemetery in 2018 by the Last Post Fund.