Private James Redsky enlisted in June 1916 and served with the 52nd Battalion in France and Belgium. He returned to Canada in January 1919.

James (Esquakesik) was the son of Chief Redsky (Miskokesik) and Endopeek of Shoal Lake First Nation in northwestern Ontario. Chief Redsky and his wife had at least seven sons and five daughters including Edith, Kathleen, Edward (Ogema-winni), James (Esquakesik), Herbert, Alex and Peter. The children attended Cecilia Jeffrey School, a Prebyterian day/boarding school that opened on Shoal Lake in 1902.

James enlisted on 26 June 1916 in the neighbouring town of Kenora, signing up with the 141st Bull Moose Battalion. His brother Edward joined the same unit two weeks later. James said he was born in Shoal Lake in October 1898. His occupation was labourer and next of kin was his father Chief Redsky. James and Edward likely left for Port Arthur on 1 August with the rest of the Kenora detachment. The battalion trained in Port Arthur over the fall and winter. James contracted the measles in March 1917 and spent two weeks at a hospital in Winnipeg. He was back with his unit when they left Port Arthut on 21 April 1917. The men embarked from Halifax a week later on the SS Olympic. They arrived in Liverpool on 7 May and James was transferred to the 18th Reserve Battalion the same day.

Near the end of June James was posted to the 52nd Battalion and sent to France. That fall the Canadians took part in the Battle of Passchendaele and James was wounded on the first day, 26 October 1917. The following day he was evacuated to No. 2 Canadian General Hospital in Le Treport. After four days there and a week at a convalescent depot he was discharged to base details on 7 November. He rejoined his unit at the end of November and in December he had two weeks leave over Christmas. In April 1918 he was ill with a fever and in June he was diagnosed with a septic thigh. He spent some time in several hospitals and rejoined the 52nd Battalion at the end of July.

The Canadians were heavily involved in the last months of the war, starting with the Battloe of Amiens on 8 August 1918. At the end of September James became ill with gastroenteritis, possibly due to gas poisoning, and on 3 October he was admitted to Bradford War Hospital in England. He was back on duty about a month later but spent the remainder of his service in the UK. He embarked for Canada on the SS Olympic on 11 January, arriving in Halifax a week later. He was discharged in Winnipeg on 17 February. His brother James also served with the 52nd Battalion and he came home in August 1919.

After the war James returned to his home at Shoal Lake. He was a devout believer in the Midewiwin and he became a holy man after the death of his uncle Baldhead Redsky, a leading holy man. James was the author of “Great Leader of the Ojibway: Mis-quona-queb” which was published in 1972, and he also co-authored other books. Nothing further is known about James at this time but online information suggests he passed away in 1977.

James and Edward are commemorated on the Anishinaabe Veteran Heroes plaque in Kenora and on the Aboriginal War Veterans Tribute list found here.

“The Germans kept coming, swarming over the trenches in attack. Our machine-guns got red hot and the air was filled with smoke. When the fighting finished, I went over to the front line to see the damage. It was an awful mess – Germans and Canadians lay all over, some wounded, some dead. I went back to rest and wrote to Blanche: The boys have gone, but not their sweat nor their blood. That will remain forever.”- James Redsky, First World War veteran. An Ojibwa from Shoal Lake, Ontario, Mr. Redsky is quoted in James Stevens, ed., Great Leader of the Ojibway: Mis-quona-queb, p. 17. 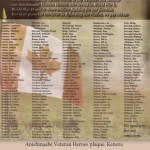